It was cold, I was tired, and my ankle was already throbbing as they began corralling us into the starting chute. Everything leading up to race day was less than ideal, to put it mildly. I had experienced various injuries over the course of the past several months that negatively impacted my training. The week prior had been hectic at work, consisting of long 14 to 17-hour days spent on my feet, and the resultant sleep deprivation was not working in my favor. Yet, despite all indications that the day could not possibly go right, I was surprisingly calm; perhaps more a sequela of my somnolence than any superior psychological disposition. Before I knew it, the race was underway, with all of us masochists taking to the trails of the Huron-Manistee National Forest in Northern Michigan. 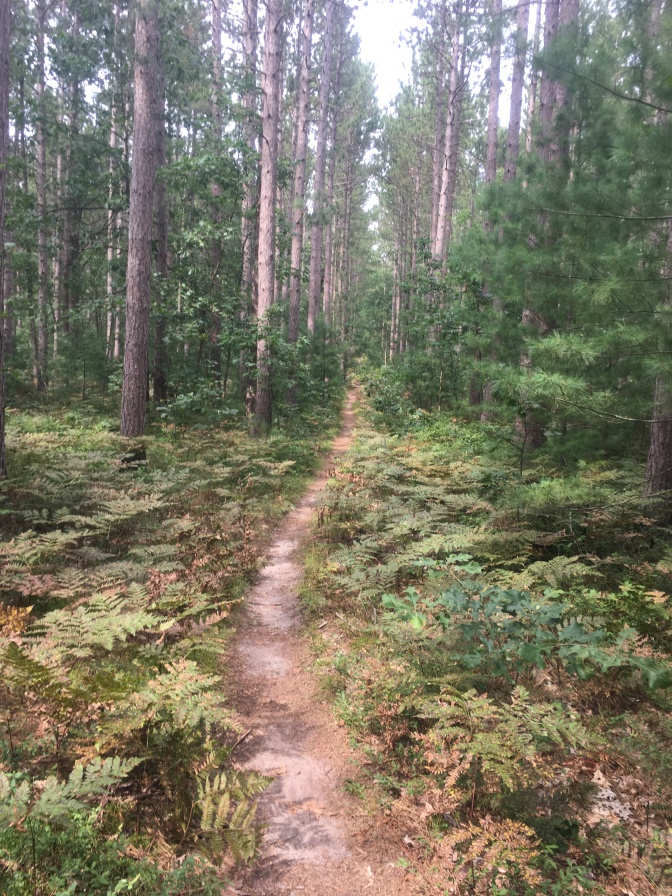 Within the first mile, I knew I was in trouble. About two months ago, I had sustained a bad ankle sprain while on a trail run. While it had initially improved with rest followed by a gradual return to activity, it had decided to act up again two weeks prior to race day. As I am often an expert when it comes to denial, I told myself it was just a little sore, nothing to worry about before a 50-mile foot race. As I jogged along those first, flat, easy miles, the pain emanating from my ankle made it abundantly clear that it had no intentions of diminishing any time soon. And I wasn’t the only one suffering; my running buddy Leah had begun a battle early on with nausea, which would plague her throughout the race. But it was a beautiful morning with perfect weather, peaceful scenery, and good camaraderie. So we both forced the pain and discomfort down as we cheerfully chatted about a variety of topics and commented on what a great day it was. Soon the miles began to fly by. 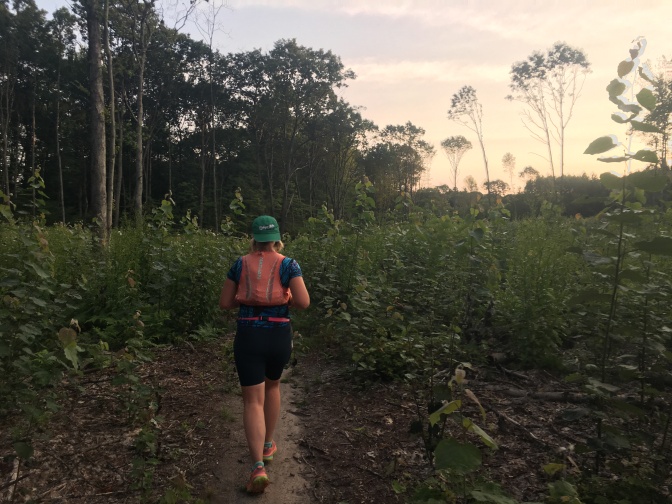 We quickly discovered the highs and the lows of ultramarathon running – both figuratively and literally. The course was fairly hilly, and both the climbs and descents took a toll on the legs. Our strategy was to walk the uphills to conserve our energy over the duration of the run, and make up the pace by running the downhills hard. Ironically, I find the descents most challenging but relish the climbs, whereas Leah is the exact opposite. This dichotomy in our approaches proved useful, as we would push one another during the most challenging stretches of trail. We also both began suffering more from our respective issues. Leah had to slow down when her nausea became unbearable, whereas I was finding if I stopped or walked too long, my ankle pain became increasingly intolerable. Our issues became at odds with each other, and so we opted to part ways after running the first 30 miles together. 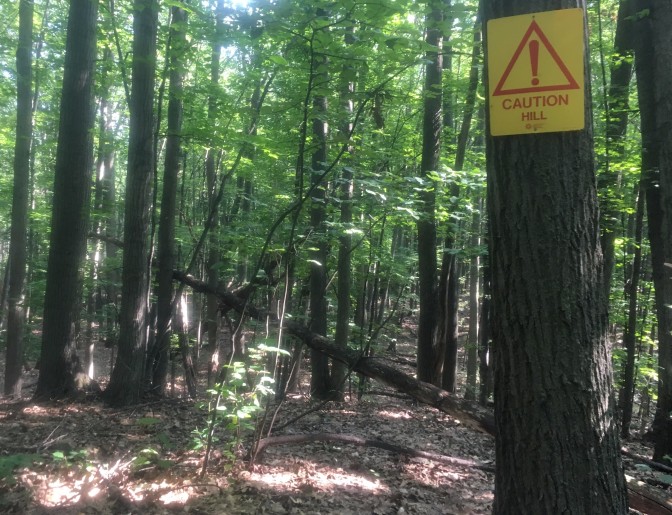 For the next 10 miles, I hit a sweet spot. I felt relatively energized and the pain from my ankle was nearly nonexistent. I had reached the famed “runner’s high”. I credit those endorphins for helping me push through what would have otherwise been a big psychological low point for me, as I was now running solo. But nothing lasts forever, and as I approached the 40-mile mark, the pleasant feelings ebbed away, leaving me with an overwhelming sense of fatigue and pain. As I grew more tired, I didn’t lift my feet as much, resulting in a drastic increase in my incidence of tripping. Each time I caught a tree root, I caused further damage to my ankle. At one point, after a particularly bad stumble, I could barely put any weight on my ankle as I hobbled a couple of steps. I thought with certainty that my race was over. But then I looked at my watch – there was still plenty of time before the 14-hour cut off, and I was within 10 miles of the finish. At that point I knew with absolute certainty that I was going to make it, come hell or high water. 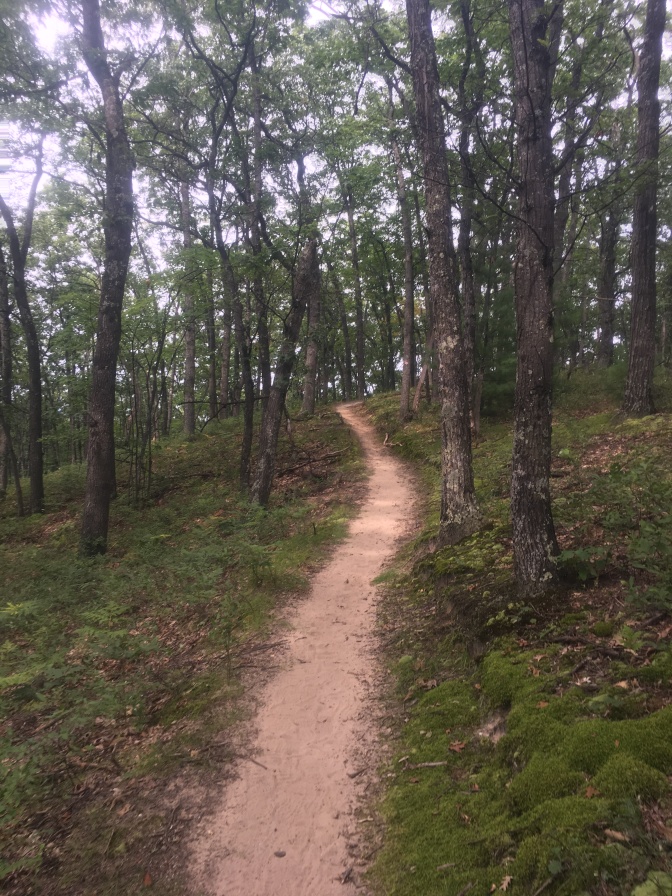 That was enough to boost my morale and keep me making forward progress. The finish line was close – I could feel it like a magnet pulling me towards it! After being passed throughout most of the race, I began catching runners ahead of me. As I passed by, we offered words of encouragement to one another. Between that, the aid of the race volunteers, and all the support I felt from my friends and family back home, I felt unstoppable. Suddenly, the woods cleared and there it was before me! I charged on ahead, crossing the finish line in a little under twelve and a half hours.

As soon as I stopped, I realized how bad my ankle was. The adrenaline wore off quickly, and I was effectively left a cripple. But it was worth it! And Leah, too, fought through her setbacks and crossed the finish line, all smiles. As we retired for the evening, a couple of invalids, we made a solemn vow to each other: under no circumstance were we to talk each other into signing up for any future races for the next month!

I knew that I would have either one of two reactions after this race: I would swear off running forever, or I would sign up for a 100-mile race (blame that on my all-or-nothing personality). At this point, I find myself leaning heavily toward the latter. However, only time will tell. First, I need to completely rehabilitate my ankle. I also have many other goals at present, involving my career and other aspects of my life. But as I reflect on these experiences, I can’t help but look towards the future and think, what’s next? I am an unabashed dreamer, and I can’t wait for the next challenge that lies ahead!